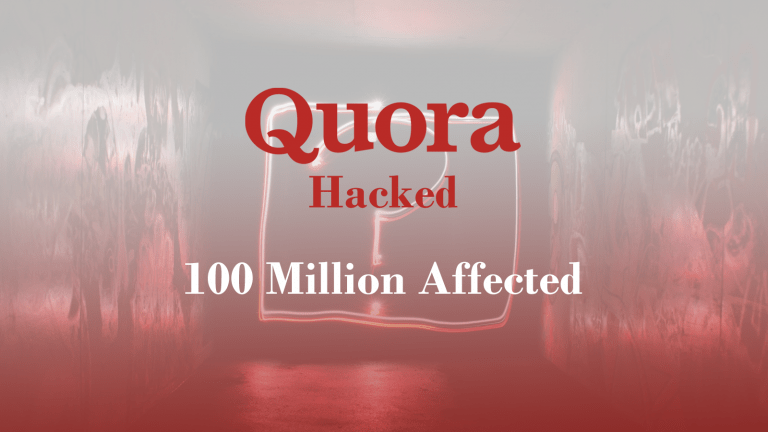 Quora.com, a question and answer website, announced that they were hacked. The cyber security incident was discovered on Friday, November 30. The data of over 100 million Quora users, about one-third of its accounts, was compromised by hackers.

The Quora hack ranks as one of the largest hacks of 2018. Fortunately, there are no credit cards to be had or other payment information. This is still a serious cyber attack. Users can log into Quora.com using their social media profiles including Facebook. We saw with the Cambridge Analytica incident how user social data can be used to construct online audiences, predict behavior, and even influence elections. Human behavior and interest data is valuable on the market, especially to advertisers.

The Quora hack is another large-scale data breach. It comes only a few days after Marriot announced that over 500 million hotel guests’ data was hacked from their Starwood reservation system.

Like many other large-scale hacks, Quora retained the services of a third-party cyber security firm to help with the cyber security investigation. Law enforcement officials were also notified. To find out more about the incident, visit Quora’s help section.

What was stolen in the Quora hack?

Quora hackers took the personal information of users. Although the vast majority of data hacked was already public on Quora, it is still a cyber security incident for the site. Hacked information includes:

Quora noted in the announcement that only a small percentage of users have sent or received direct messages. Direct messaging is not a popular feature.

Quora is emailing all users that may have had their data compromised in the hack. All users should change their passwords. Those users who are believed to be compromised have been logged out of their accounts. They need to reset their account with a new password to regain access.

Quora is a public website where users go to exchange information. Some users answer questions, others post queries hoping for answers. Others just upvote or downvote answers. The Quora system suggests questions for users to answer. Anything goes as far as what is asked. The website was launched in California in 2019 by founders Adam D’Angelo and Charlie Cheever. Quora.com has about 300 million users.