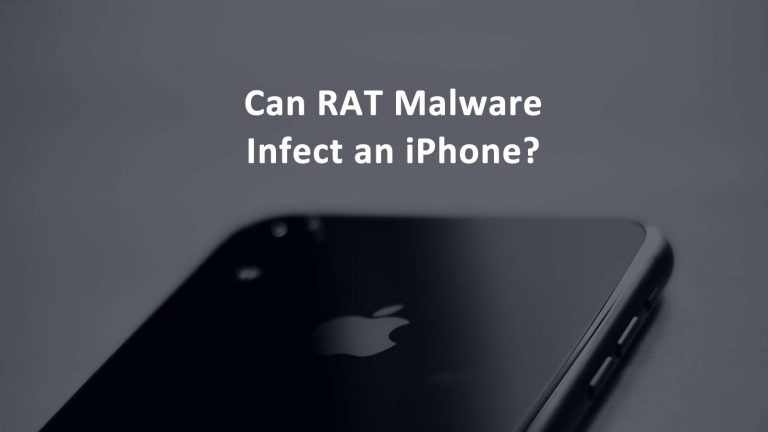 Can RAT Malware infect an iPhone?

iPhones and other iOS devices are vulnerable to RAT Malware and other malware, contrary to what Apple customers may think. iPhones, iPads, Mac Books, and iPod touches have all been the target of successful malware and spyware campaigns. Like other internet connected devices, Jailbroken and out-of-date hardware and software increases the chances of a device becoming infected.

It is possible for iPhones to get malware. However, if you never install games or other apps outside of the Apple store, update your operating system and all apps promptly, and do not jailbreak your iPhone, then the risk of malware is lower than it is for Android devices.

READ: How to Remove RAT Malware From an Android Phone

Did You Receive RAT Malware Email on Your iPhone?

iPhone users and Mac users are not as vulnerable to RAT Malware as Android users are, it is still possible to infect an iPhone with malware. RAT Malware campaigns tend to target victims with emails scaring them into paying a ransom.

The hacker may be attempting to scare the victim into sending a ransom payable in Bitcoin or another cryptocurrency. RAT Malware email campaigns may threaten to spam all your contacts from the infected device with an embarrassing message.

It’s not just hackers that have successfully infiltrated iPhones with malware. WikiLeaks exposed information about leaked information on the U.S. Central Intelligence Agency (CIA) and naming the information Vault 7. The CIA arsenal of hacking tools included malware that infected, controlled and extracted data from iPhones and other iOS devices.

The iPhone Wiki lists a history of iPhone malware hacking from various hackers.

iPhone – What is Jailbreaking?

Jailbreaking is the process of getting into a device’s filesystem to bypass security measures. This process is also called rooting. Users jailbreak iPhones to obtain administrator privileges and remove all Apple restrictions on what can be installed or removed, install any app from any source, and tweak iOS.
Jailbreaking also significantly increases the risk of your iPhone getting a virus. Many malwares only work on Jailbroken phones.
iOS users can jailbreak iOS devices with publicly available apps like unc0ver and Electra.

Jailbreaking voids your Apple warranty and Apple Care service.
If you’re an Apple Care or Apple Care Plus customer, your iPhone warranty is extended, so it’s always worth checking in at the Genius Bar.

How to Prevent RAT Malware- iPhone

How to Turn on Automatic Updates – iPhone

RAT Malware iPhone – What to Do

iPhone and Mac users are not immune from viruses and malware. Scan your MacBook Pro, iMac Pro, MacBook Air, iMac for viruses, malware, spyware, adware and other apps that may have been installed.

How to Remove RAT Malware from iPhone

Try using a malware scanner that is specifically for malware detection and removal. Although there are free apps out there, a subscription app with up to date libraries will most likely work best.
Try Webroot
You may have to reset your iPhone to start over with factory settings.

To reset your iPhone from an iCloud backup:

After that is complete, you can restore your iPhone from an iCloud backup. Choose a backup that was made before your iPhone was compromised with malware.