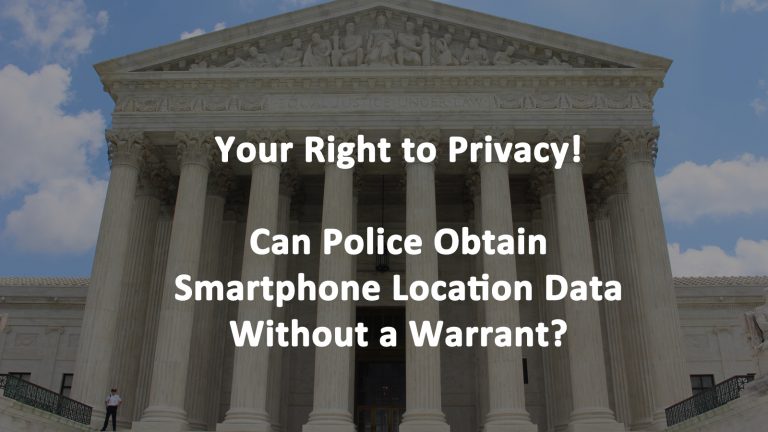 Right to Privacy Can Police Obtain Smartphone Location Data Without a Warrant?

Today the Supreme Court Justices heard arguments in a major right to privacy court case, Carpenter vs. USA. The case challenges an interpretation of the law that allows crime investigators to obtain a suspect’s smartphone location data, including a location history, from wireless service providers without a warrant. police must obtain warrants to get data on the past locations of criminal suspects using cellphone data from wireless providers. Attorneys for Carpenter argue that the lack of a search warrant is a violation of the Fourth Amendment.

Timothy Carpenter was arrested in 2011 and convicted for a series of armed robberies of electronic stores in Ohio and the Detroit, Michigan area. Prosecutors used cell phone site location from Carpenter’s cell phone providers as part of their evidence. The location data, obtained with a search warrant, showed the defendant was near the crime scenes.

Mr. Carpenter’s American Civil Liberties Union lawyers maintain that this violates Carpenter’s right to privacy and was unreasonable search and seizure under the Fourth Amendment.

How does mobile phone tracking work?

It is possible to track the position of a mobile phone or other cellular connected electronic device by its position relative to nearby antennas. The Global System for Mobile Communications (GSM) uses the E11 chip that cannot be disabled to determine a device’s signal strength to triangulate proximity to nearby cell towers to determine location. Cellular phone service providers like Verizon and AT&T and internet companies like Google can track a device’s location at all times.

In addition, the metadata stored with a smartphone’s photos can determine where a phone was and when. Although this court case does not involve the images that were on the device itself.

The standard for accessing location data from electronic devices stems from the 1986 Stored Communications Act. This was last amended in 1994. Technology and the accuracy of location pinpointing have both evolved since then. The U.S. Constitution’s Fourth Amendment was, obviously, drafted in the 18th century. Requesting cell phone location data records does not require a warrant. However, it does require a court order. A court order is much easier to obtain than a search warrant.

A Supreme Court ruling on this digital right to privacy issue is expected in June 2018.