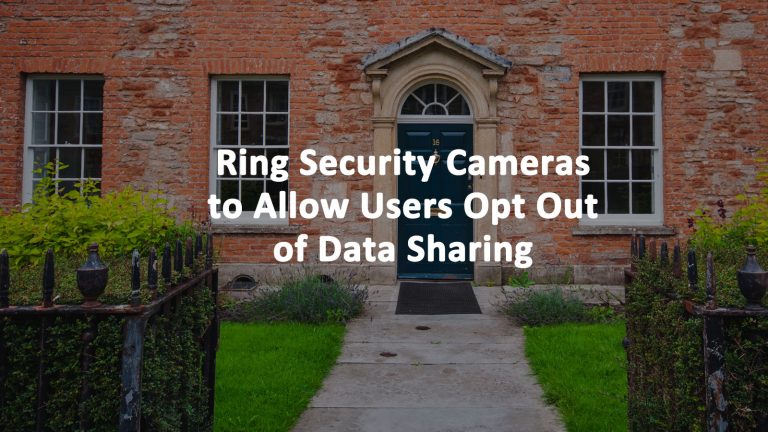 Ring announced the company launched a Control Center feature that lets its security camera users manage settings and opt out of data sharing. A report by the Electronic Frontier Foundation (EFF) found that data from the Ring mobile app sent customer data to branch.io, mixpanel.com, appsflyer.com and Facebook.com without their knowledge. Shared personal information includes name, email address, and more. Ring announced that users will be able to control data sharing – but how much control was not specified.

Ring security camera owners use the security cameras mounted outside their home to see who is calling at their doorstep. Using a mobile app, camera owners can view a live video stream of anyone who is in view of their camera and speak to them through a microphone and speaker integrated into the camera. The Ring mobile app can be accessed from anywhere. The advantage is that the system can be used to make it appear that someone is present to discourage burglaries.

Amazon’s Ring security cameras not only surveil your neighbors they also track customers too. While the cameras were surveilling neighbors and delivery people, Ring was busy collecting and sending data to third-party partners like Facebook. The data Ring was sending includes customer names, email address, home IP addresses of household camera users, mobile service carrier information, tracking identifiers, and sensor data from devices. All of this information can be used to track customer behavior across other apps and services.

Ring security cameras present major privacy concerns for everyone in range. The cameras use fisheye lenses with a wide field of vision which also capture people walking past the door on public sidewalks or driving in the streets. Ring camera owners can share video clips captured from their cameras to an app known as Neighborhood. It allows others using the app to see footage of anyone within the range of the camera, including the police.

Amazon acquired Ring in February 2018. In April 2019, a post on Gizmodo revealed that over 225 police agencies in the United States has already signed partnership deals with Ring. Police agencies receive subsidized prices for cameras so they can pedal them to citizens at a discount. In return, the police receive free access to the videos that the cameras are recording without a warrant. A convenient tool for intimate new levels of surveillance. Data from Ring’s blog shows that number of police partnerships has now skyrocketed to 967 agencies nationwide. This raises serious data privacy concerns about what video surveillance is being shared with how it is being used. Although customers can opt out of sharing with police, Ring may still give video footage to police with a search warrant. Innocent people on the videos have no control.

There is no research that proves Ring cameras correlate to a reduction in crime.

Ring added a layer of security after a series of security incidents where hackers were able to breach Ring security systems and talk to customers inside their homes. Ring made two-factor authentication (2FA) mandatory to log into all online accounts. Ring 2FA uses email or SMS text authentication which is not the most secure form of verifying account access but is an improvement. Using an authenticator app, or biometric login, would be a better form of account security. Camera owners using the mobile app can add fingerprint scams or facial recognition to protect the device Ring is installed on. If your device is older and does not support biometric login, consider upgrading to a phone, tablet, or laptop that does.