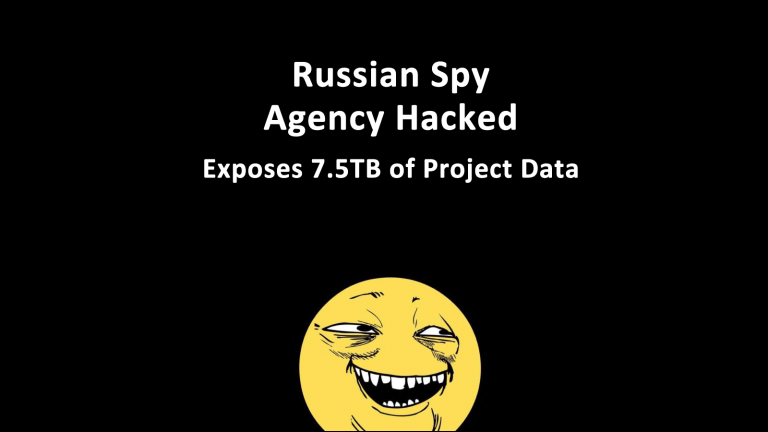 Russian intelligence agency, Federalnaya Sluzhba Bezopasnosti, (FSB) or Federal Security Service in English was the target of a cyber attack. According to the BBC, hackers stole 7.5 terabytes of data including Russia sponsored plans to gather data from social media accounts and hack encrypted Tor browsing sessions. Russia’s FSB is the equivalent of the United States Central Intelligence Agency and Britain’s Security Service known as MI5.

Hackers breached an FSB contractor, Sitec on July 13. The hacking group named 0v1ru$ defaced Sitec’s website with a smiling YOBA Face, or ПеКа-фейс, along with the names of discovered secret projects. Federal Security Service project names exposed: (Arion, Relation, and Hryvnia) are all names of employees at Sitec. 0v1ru$ sent the hacked data to hacking group Digital Revolution which in turn sent the files to media outlets and posted the news on Twitter.

Russia is trying to crack Tor anonymous web browser. Hacked FSB project plans were sent to local news outlets by Digital Revolution as proof of the activity. Hacked information includes plans to strip anonymity from Tor browsing, scraping of social media sites (including Facebook and LinkedIn for personal information, and plans to segregate Russian internet from the rest of the world. It appears that the FSB has been trying to decrypt Tor web traffic since 2012.

0v1ru$ downloaded part of the project files before deleting them from Sitec servers. Digital Revolution is the organization that hacked Kvant Research Institute in December 2018. Kvant is administered by the FSB.

What is Russia’s Federal Security Service?

Russia’s Federal Security Service (FSB) is the successor to the former Soviet-era Komitet Gosudarstvennoy Bezopasnosti or KGB. FSB was created in 1994 and is headquartered in Moscow. The FSB is responsible for counterintelligence gathering, antiterrorism efforts, military surveillance, and electronic surveillance abroad. FSB’s Military Unit 71330 of the 16th Directorate is accused of emailing spyware to Ukrainian intelligence officers in 2015.

What is TOR Browsing

Tor browsing is a technology used to keep internet traffic including web browser activity, messaging, forums, and other communications private and secure. Tor browsing thwarts network surveillance or traffic analysis. All internet traffic is funneled through a global overlay network consisting of more than seven thousand relays from volunteers who runs servers for free. Tor traffic cannot be intercepted between or at the nodes.