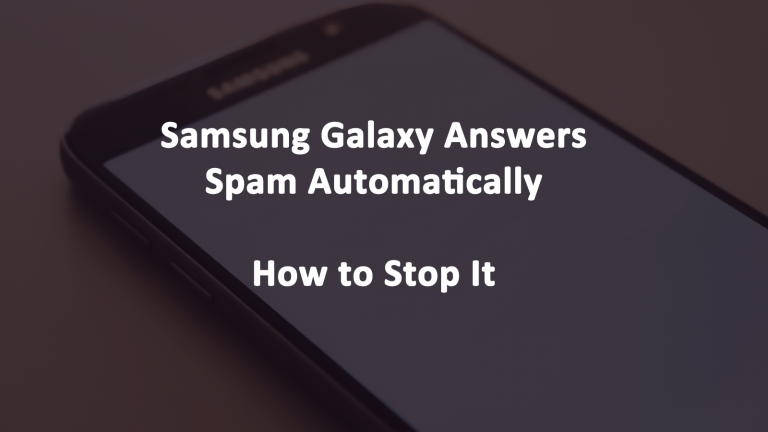 Is your phone answering calls on its s own when you didn’t tap a button? Mine did. Voice answering was unknowingly activated and allowed a spam call to connect using the speakerphone. This occurred a few days after I accepted an Android system update from my carrier. My phone answered a spam call in its own.

Yesterday I was talking to someone when a call came through to my Samsung Galaxy 7 phone. The call came from a spoofed exchange I’ve seen before. It’s a call I receive almost every weekday. The CallerID reports some variation of the same area code with a slightly different phone number. Fortunately, this spammer does not work on weekends. I could tell you why the spammer goes with the area that they choose, but that would be divulging too much personal information about myself, but they’re on to me!

Since I know it’s spam I ignore the call. It’s been reported but that of course, does not deter a spammer who is spoofing an incoming phone number. Anyhow, I ignored the call and kept talking to the person in front of me. The phone was next to me on my desk with no headset attached physically or via Bluetooth.

Suddenly the call was answered and the robo caller was talking on the speakerphone goin on about how “there’s an issue with your account.” A common spammer scare tactic about some MasterCard credit card that I do not even have.

Did a Virtual Assistant Answer a Spam Call?

After some searching for an answer and thinking it was a voice assistant at work I checked for settings on my Google app. Someone also suggested Samsung’s Bixby as the culprit. It wasn’t the Google App and Bixby is only available on Galaxy 8 and better.

A few days ago, my cell service carrier pushed an Android system update. After some searching I found that I had a setting turned on that allowed calls to be answered with a voice prompt. I looked up reviews but still have no idea if update G930VVRS9CSB1 was responsible for this settings change.

Android Voice Call Answering – How to Shut It Off

How do you answer an incoming call on Android?

You can answer or decline calls by saying Answer or Reject when the call is ringing. If you answer the call with a voice command, the call is answered, and the speakerphone is turned on. Ugh. It assumes the call recipient cannot touch the phone or are driving, Makes sense, but we all listened to the creepy robo caller.

I was in the middle of a conversation about public policy in Nevada the day my phone answered itself. I thought back to what I was talking about in the room within earshot of my pone. I don’t recall saying the word “Answer”, but my phone obviously heard it or something close enough to it. No more – voice answering is off for now.

How do I turn on voice control on Android?

To answer the call you have to say, “Answer.” To reject the call you have to say, “Reject.” Contrary to popular belief, the voice answering feature works when headphones are used with the phone. Unlike Google Assistant, the Android answering service does not discern a spam call from someone in your contact list, SO it is going to answer a spam call just as readily as it takes one from your mom.