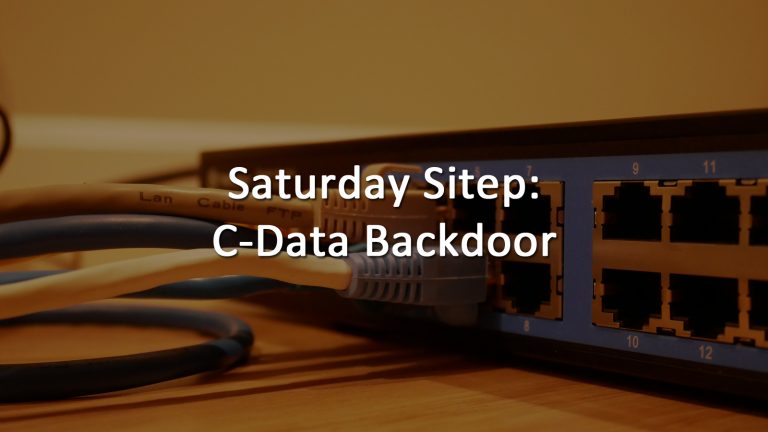 Hardware backdoor allows remote access to the device with full

C-Data is a well-known hardware manufacturer located in Shenzen province of the People’s Republic of China, which provides internet access through its Fiber-to-the-Home Optical Line Termination (FTTH OLT) devices. Fiber optics are the quickest way to transmit data, literally at the speed of light through the use of glass that is as close to perfectly clear as is possible to make and a light source.

The light source is modulated to provide for the transmission of data, and this signal is strengthened by repeater stations along the data’s journey. Fiber optic cable, being made of glass, is not the most flexible and generally terminates somewhere outside of the user’s home where it transfers data to an ethernet cable, which is much more flexible at the cost of speed. C-Data’s FTTH OTL is the endpoint that allows a fiber-optic connection to be brought as close as possible to the end user’s home, server, building, etc.

Naturally, these devices have access to every piece of data that passes through them, and gaining access to one would represent a major, if not overwhelming, espionage victory, which is why a recent report by a pair of cybersecurity researches is so concerning. Researchers Pierre Kim and Alexandre Torres have reported that they have found several security vulnerabilities that would allow an outside party to gain access to all of the data being passed through C-Data’s FTTH OTL

While all several of these vulnerabilities appear in the firmware of the devices (and could, possibly, be written off as poor coding), one of them is hardcoded into the device’s hardware. Even worse, this hardware backdoor allows remote access to the device with full administrative permissions. Pierre and Alexandre published their findings immediately upon discovery, believing that the nature of vulnerabilities implied that they had been inserted intentionally by C-Data.