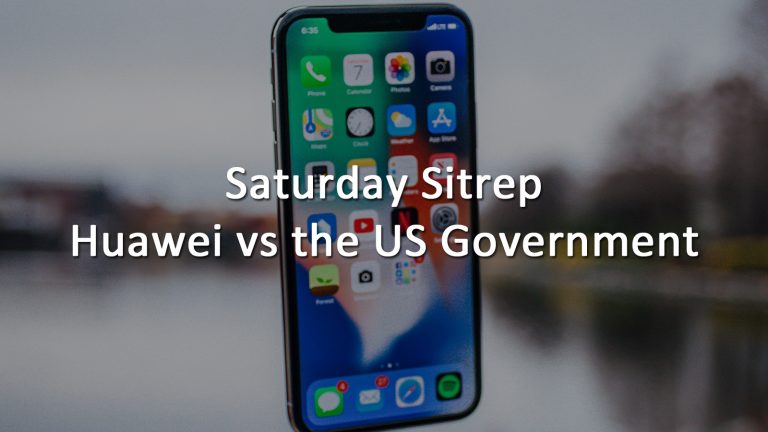 Saturday Sitrep: Huawei vs the US Government

The US government publically decided to bar Huawei products from being used, limit Huawei’s access to the US market, and attempted to convince its allies to do the same while claiming that major security flaws existed in Huawei products that would allow the Chinese government to spy on any Huawei user. The US government also claims that Huawei is soo closely intertwined with Chinese intelligence agencies as to be inseparable and that any device produced by Huawei would be too vulnerable to the insertion of intelligence gathering software of hardware.

In this day and age, communications technology is a major source of risk, whether communications are protected (such as a terrorist’s device) or unprotected (and thus, easy to break into). It’s important to note that the US government has, and most certainly still does, attempts to sell compromised hardware and software to individuals and organizations for it to exploit in the future.

At the RSA conference in San Francisco, Katie Arrington acknowledged that every intelligence agency is engaged in this practice because the rewards it can provide are too great to pass on. For its part, Huawei has repeatedly denied any collaboration with Chinese intelligence gathering agencies and has asserted that its production facilities are secure. Huawei has challenged the US ban in court, but the results of that challenge will take years of litigation to find. Beyond challenging the ban legally,

Huawei claims that as the largest producer of mobile products in the world that the US simply can’t choose to not work with them. Huawei produces on a scale totally unmatched by other mobile companies and is capable of leveraging economies of a completely different scale. Huawei devices, even in the US, are usually cheaper than the equivalent device produced by mainstream brands. Huawei is also the premier producer of 5G technology, something that the US has declared to be of critical strategic importance.