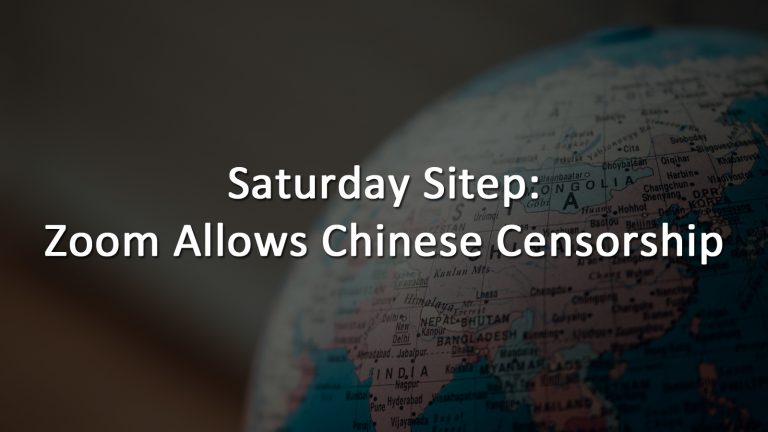 Zoom is once again in the news, not for a data breach, but for giving in to demands from the Chinese government to stop a Zoom call commemorating the Tiananmen Square Massacre. The call was hosted by an account out of Hong Kong and joined by others from around the world, including the United States. Zoom banned all of the accounts involved in the call at the request of the Chinese government. This raises several questions, the first being: how did the PRC know that the call was taking place, and which account was hosting it? It’s possible that the call was public, or more than likely, the vast domestic surveillance apparatus caught wind of the call as we know the term “Tiananmen” is a term that’s been flagged in the past. We also know that the PRC steps up its monitoring efforts near important events, such as the date of the Tiananmen Square Massacre, which occurred on June 4th, 1989.

More concerning, Zoom not only banned accounts in China but those in the United States as well. These actions generated an angry response from the US Senate, which accused Zoom (which is an American company) of prioritizing profits over the principles of the country they’re founded in. Zoom responded to the outrage by saying that they did not have the ability to differentiate accounts by their location, which seems far-fetched as within a few hours they announced that moving forward they would be able to do so and would not ban accounts outside of the country demanding action.

This is not the first time that Zoom has found itself facing the ire of the senate, as Nancy Pelosi previously expressed distrust of the company, referring to Zoom as a “Chinese entity.” While Zoom is an American company, it’s development staff are primarily located in China. The security of their product has been called into question, on suspicion that any data put onto the platform would be accessible to the Chinese government, something that the US Senate would certainly like to avoid.

As the use of Zoom has increased, it has repeatedly been criticized for its poor security, data breaches, and calls being taken over by malicious actors. India and Taiwan have banned any use of Zoom for government reasons, with the United States and Germany limiting how it may be used. Presumably, Zoom is acceptable for conversations not involving sensitive information. The PRC’s ability to request the takedown of the accounts involved with the call speaks to a serious invasion of privacy, something that should concern anyone who uses or is considering using the platform. What you say is being monitored on the platform, and who knows who might be listening in?