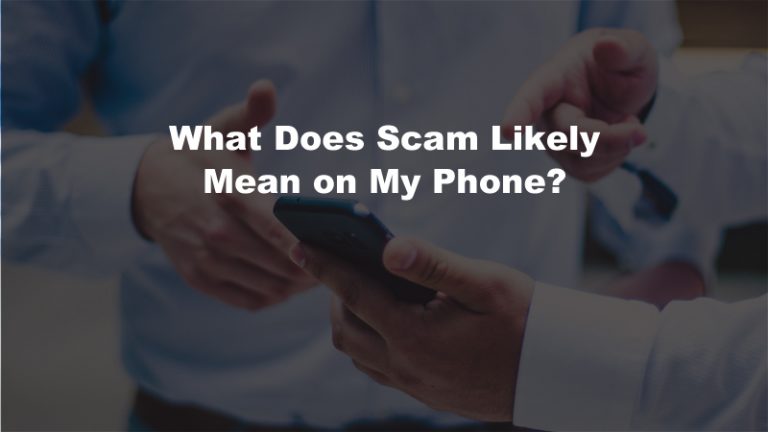 Scam Likely – What Does Likely Scam Mean on My Phone? How to Block Scam Likely Calls

Scam likely is a caller ID name you may have noticed on your phone when you receive a call from someone you don’t know. Usually the calls seem sort of sketchy. Scam likely is a Caller ID identifier that your phone may show on the screen to help prevent you from answering or responding to a scam phone call. Although it is possible that a legitimate phone number, even if it’s from someone you do business with, could show up as scam likely. Wireless carriers have lists and algorithms that help them identify likely scam calls. Scam Likely calls are often a crime as reported by the Federal Trade Commission.

What is Scam Likely?

Scam likely is a caller ID name you probably have seen on your phone when there is a call from someone who’s not in your contact list. The notification was put in place by your wireless provider to help stop scam phone calls. When you receive a call from a phone number that your wireless carrier has identified as a likely scam call your phone shows the collars name as scam likely.

In 2019 the Federal Communication Commission (FCC) enacted legislation to let wireless carriers automatically lock scam calls before they reach their customers. In the past scam calls were only blocked if a customer chose to block them from their phone. In June 2019, the FCC passed the Advanced Methods to Target and Eliminate Unlawful Robocalls and ruled that phone companies may, as a default, aggressively block unwanted robocalls.

However, that doesn’t mean you won’t receive scam calls on your phone. You’ll need to protect yourself. Eead our gudie on 8 Easy to Use Security Apps to Protect a Phone Right NowThe wireless carriers are only so good at blocking calls and plenty of robocalls, spam text messages and other scam calls slept through. That means you’re still going to see scam likely pop up on your caller ID from time to time.

In 2019, there were over 26 billion spam calls worldwide. It is the most common method a scammer uses to contact a potential victim. The FTC reports a median loss of $1,000 in 2019. People who are scammed by phone calls report over X number of dollars in losses each year and that number is only increasing despite the change to the FTC policy.

The user group that suffers the largest losses is seniors. Like most victims of scams there any scams including online scams email scams and phone scams seniors are often preyed upon because hackers are scammers know they likely have real estate, or a nest egg saved up for retirement. When you receive a scam call you can bet that the scammer is looking to get cash or personal information.

My in-laws have been called several times by scammers. Each time they were told that one of their grandchildren was in jail or in some sort of trouble and that they needed to bail them out. Each time they believed the caller and were ready to send money to the scammer. Fortunately, they were wise enough to place a quick call to the supposedly troubled grandchild to check and see if they were all right. They are smart people with good hearts but like many seniors are easily preyed upon because they want to help their grandchild.

What Happens When You Answer A Spam Call?

When you answer a spam call, a few things can happen. First, you have confirmed to the scammer or hacker that the phone number is indeed valid and monitored by an actual human being. So, at the very least, you have let the scammer know that the phone number is worth trying future scams. The caller might call again, robocall, or start sending spam text messages. As with my in-laws and their multiple scam phone calls, the caller made several attempts to get them to send payment over the phone. Phone scammers may try to get you to pay a fraudulent invoice, an IRS tax bill, or send bail money. Another common scammer tactic is to convince the victim to pay by sending digital gift cards or prepaid debit cards. That way the money transfer is not traceable and cannot be canceled.

Scammers may also ask for a wire transfer to multiple accounts to get money quickly while making it difficult to trace the money. Often if you wire transfer money to a scammer and report the fraud to your bank within 24 hours, your bank can pull the money back. This was the case with Shark Tank host Barbara Cochran. One of her staff fell for an email phishing scam and paid a fraudulent invoice with a wire transfer.

How to Block Scam Likely Calls

The new FCC ruling does not help with individual scam callers.

How Scam Likely Calls Can Hurt Your Business

Scam likely calls can hurt your business in a number of ways. If a number pops up on your phone labeled as scam likely you probably aren’t going to be too willing to answer it. However, that means you may also be missing a legitimate call from a customer. Although scam likely caller ID notifications have good intentions, sometimes they are incorrectly labeled legitimate phone numbers. If you own a business this can really hurt sales and relationships.

You Calls May be Blocked

Scam likely may work against you if your number is being incorrectly labeled as a scam likely calls or blocked all together from potential customers. If your calls are showing as scam likely, then you should contact your wireless provider and see what they can do to help you.

People May Not Answer Your Calls

Many business owners use their personal phones for work calls including staying in touch with customers and vendors. People may not answer any call that’s listed as scam likely while others may answer and get nasty with a caller. Ask your contacts to add you to their contact list.

Vendors may not answer your calls if they are labeled as scam likely on their phones. This can put a serious dent in your business and make it difficult for you to order supplies or things you need for your day-to-day.

What Does a Scam Likely Mean?

If a call is showing as a likely scam, that means a wireless provider has identified that that phone number sends a large amount of phone calls in short periods of time. Often this can be the result of robo calling or using an automated phone dialer to blast people with calls. Using an automated phone dialing system is a crime. Likely scams can come from phone numbers that have been reported to wireless carriers and the FTC as malicious or fraudulent.