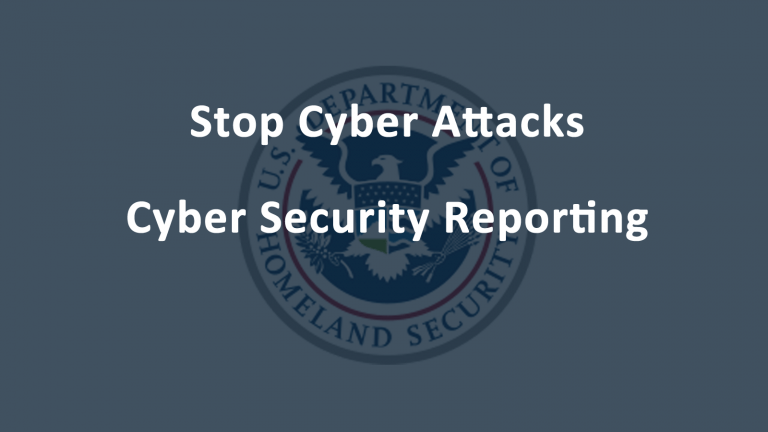 Did you know there is a convenient way to report cyber-criminal activity at the United States Department of Homeland Security Website?

As you may expect, the government of the United States gives serious attention to cyber security threats aimed at governmental systems, corporate systems, and public systems. Cyber security attacks by hackers on critical systems and networks are growing at an incredible rate. Not only are cyber attacks initiated by small hackers and rogue groups, but national governments abroad are now proven to be behind cyber security hacks at massive levels backed by vast resources and funding. Cyber security threats can affect the defense of the United States as well as the economy of the nation. The Department of Defense (DOD) reported an $8.5 billion cyber security budget for FY 2019. This is a $340 million increase over 2018.

Founded in 2002, as a result of the September 11 attacks on the United States, the Department of Homeland Security (DHS) combined 22 governmental groups under one lead agency. When DHS comes to mind, most of us think of the Transportation Security Administration (TSA); US Customs Border Protection; or US Border Patrol. However, two of the twenty-two subgroups, the United States Computer Emergency Readiness Team (US-CERT) and the Cyber security and Infrastructure Security Agency (CISA), fall under DHS and are at the forefront of cyber security protection for computer systems within the US and abroad next to the DOD.

How much is the DHS Cyber Security Budget?

The DHS overall budget is now approximately $47.5 billion. Due to the overlapping work of many agencies under the DHS umbrella, it is difficult to determine how much of this budget is actually allotted for cyber security. Comparing the total DHS budget to the estimated $75 billion per year spent by U.S. corporations on cyber security and you can understand why an overarching organization to mitigate cyber security vulnerabilities and thwart attacks on a macro level is important to the nation and the economy. Does DHS have enough budget and resources to get the job done? Probably not, but that is a subject for another discussion.
DHS Cyber Security Incident Reporting Site

Many of us have experienced hackers trying to gain access to your computer system or data with your prior permission or knowledge. Other illicit activities may include disruption or denial of service or preventing access to your data; using your system to process other illicit activities; storing hacker’s data on your system, and changing system software without your knowledge or consent. Some even go as far as changing system hardware and firmware to benefit or promote their illegal activities.

The following DHS US Cert links can be used.

DHS cyber security groups are not intended to resolve individual issues. They are set up to track and thwart activities on a higher level to eliminate future issues altogether. In other words, if you report an incident to DHS, don’t expect a call back by a DHS technician to work through to resolve your problem. However, reporting the incident to DHS will help them track the problem and institute fixes on a macro level as well as pursue the hackers so that future occurrences are minimized or eliminated. By reporting cyber security issues relating to hacking and phishing to DHS, you are helping resolve illegal hacking on a broader scale.