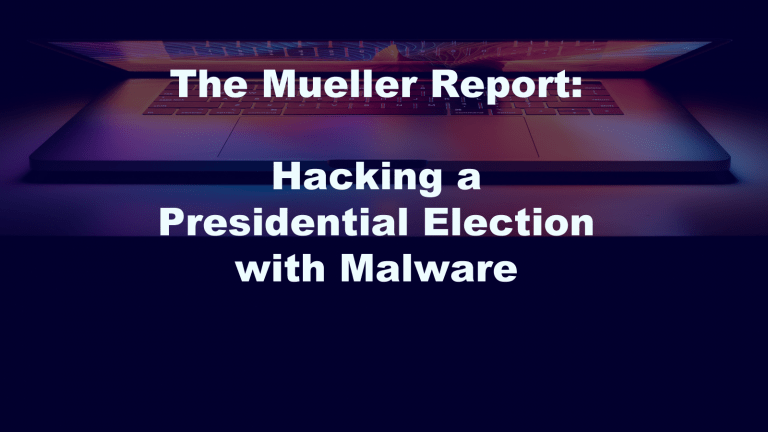 The Mueller Report is officially titled, The Report On The Investigation Into Russian Interference In The 2016 Presidential Election, Volumes I and II, by Special Counsel Robert S Mueller, III. The report outlines the investigation into Russian interference with the 2016 US Presidential elections. It details how Russian hackers compromised election websites, hacked Clinton campaign email servers, and conducted email phishing campaigns.

According to the Mueller Report, in June 2016, a GRU unit hacked the IT system of the Illinois State Board of Elections by exploiting a vulnerability in its website. GRU gained access to millions of registered Illinois voters. They downloaded thousands of voter records before the malware was detected and access was shut down.

How Does Trojan Malware Work?

Trojan is an umbrella term for a malware delivery strategy. Trojans are also considered a form of malware as they carry out unwanted activity on a computer or IT system. Trojans are used by hackers to gain access to computer systems and hardware. Targets are tricked into downloading an email attachment or clicking on a link that sends them to a spoofed website. The trojan loads files and executes malware on their computer systems.

In addition to hacking election related IT systems, GRU also hacked the computer systems of the DCCC and the DNC. Beginning in March 2016, GRU hacked the computers and email accounts belonging to Clinton campaign workers. This including the email breach of campaign chairman John Podesta, the Mueller report stated.

Both the DCCC and DNC IT systems were infected with two malwares, X-Agent and X-Tunnel according to the Mueller Report page 38. The X-Agent malware record the keystrokes of infected machines. It also took screenshots and recorded the files system. The X-Tunnel malware tunneled outside of the DCC and DNC networks and was used for large data transfers of stolen information.

Malware is any unwanted application on a computer, IT network, or electronic device such as a smartphone. Malware can take control or a device or download files. Sometimes malware quietly uses an infected device to spread more malware waiting for some future purpose. Malware can be used spy on the activities of a device or to recruit computers to work together in a botnet.

The malware used by the Russian hackers was developed to infiltrate computer networks and infecting as many devices as possible.

Malware is called ransomware when it locks up a machine and takes control away from its legitimate owner promising to return control when a ransom is paid. Recipients’ machines are infected when they click on a link in an email or download malware that in turn downloads even more malware. Email can be accompanied by attachments that contain malicious executable files. Malware includes ransomware, computer viruses, adware, and trackers. Well-known, recent malwares include GandCrab, SamSam, Bad Rabbit, Petya, Not Petya, and WannaCry.

How Does Malware Work?

Malware works by gaining access to a computer or system. The malware generally attempts to gain administrative rights to a device by exploiting known security vulnerabilities. An SQL injection is a chunk of malicious commands that work on SQL databases. The hacker breaks a database allowing unauthorized access to the data. Once in, they extract information from the database. In the case of the Illinois Board of Election hack, the hackers downloaded thousands of voters records before they malware was detected.