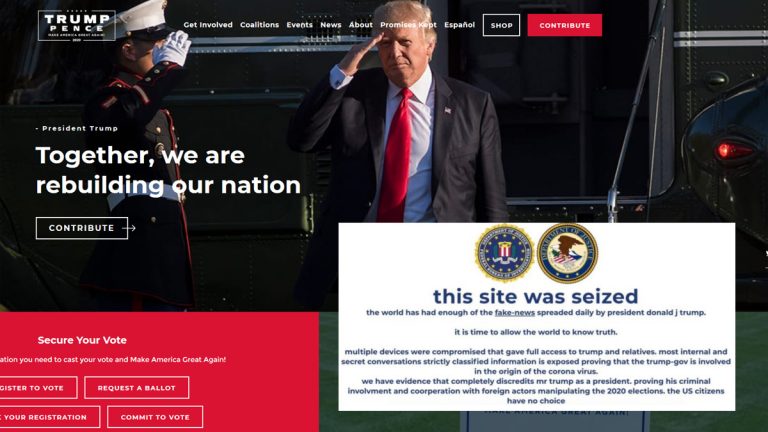 Trump Website Defaced with Claims it Was Seized by Feds

The campaign website of US President Donald Trump was defaced by unidentified cybercriminals yesterday.

The hackers posted anti-Trump messaging as well as appeal for cryptocurrency.

The attackers posted logos impersonating the US Federal Bureau of Investigation (FBI) and the US Department of Justice (DOJ) claiming the website was seized according to CBS.

The attackers posted a notice on the site stating they “have evidence that completely discredits Mr. Trump as a president, proving his criminal involvement with foreign actors manipulating the 2020 elections.”

The lower portion of the message claimed that the attackers had compromised unspecified devices belonging to President trump and his family.  The notice prompted readers to deposit cryptocurrency to vote on whether to release stolen data or not.

Voters could make their data sharing wishes known by depositing Monero into one of two cryptocurrency wallets. One for “Yes, share the data,” and the other “No, do not share the data.”

No private data was stolen during the cyber attack which persisted for about 30 minutes before the Trump campaign staff could remove it.