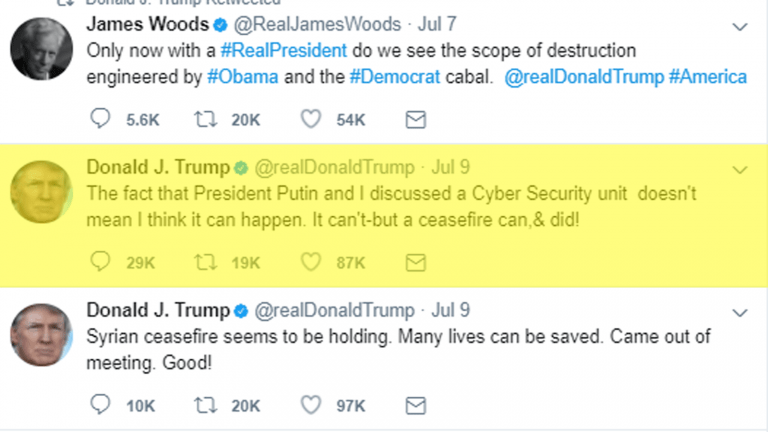 President Donald Trump proposed a joint cyber security unit to Russian President Vladimir Putin. The goal of the proposed cyber security unit is to ensure the integrity of US Elections. Treasury Secretary Steve Mnuchin said on Saturday that Trump and Putin had agreed to create “a cyber unit to make sure that there was absolutely no interference whatsoever, that they would work on cyber security together.”

The cyber security talk occurred during an over two-hour meeting between the two leaders at the G20 Summit in Hamburg, Germany. Although information security was not the entire focus of the meeting, it is a sensitive topic US leaders are looking for Trump to address and drive a solution to during G20. Other agenda items included trade agreements and the Syrian conflict.

The effort supposedly would have Russia and the United States working together to ensure data privacy and integrity. Since it was just a discussion with no details, it’s not clear how each country would handle data access. Given that many believe Russia played a part in hacking the 2016 elections for several states, giving Russia access to any data at all does not bode well with most. Why Russia would or should play a part in any US IT or cyber security policy is also a mystery to most.

In Russia, hacking is acceptable as long as the government and Russian companies are not the targets or victims of theft. The United States has much more strict laws and actively pursues hackers. The latest high-profile conviction was the 2017 conviction of Russian Hacker Roman Seleznev. Seleznev was sentenced to a record 27 years in US federal prison. He was a career hacker who made over $170 million through hacking. He was convicted of wire fraud, obtaining information from a protected computer, aggravated identity theft. possession of unauthorized access devices, and intentional damage to a protected computer. Russia initially protested the arrest of Seleznev.

Trump announced the cyber security discussion via Twitter on July 9 [Figure 1]. However, he quickly found himself defending the discussion after a quick backlash from top US Government officials and politicians including Republicans.

Those that scorned Trump’s proposal feel that inviting Russia to work on matters of this nature are foolish. Many believe that Russian is responsible for hacking the election results of more than 20 US states. Thus, Putin and Russian officials are not trustworthy and therefore should not be involved in any sensitive data.

“It’s not the dumbest idea I have ever heard but it’s pretty close,” Senator Lindsey Graham of South Carolina told NBC’s “Meet the Press” program.