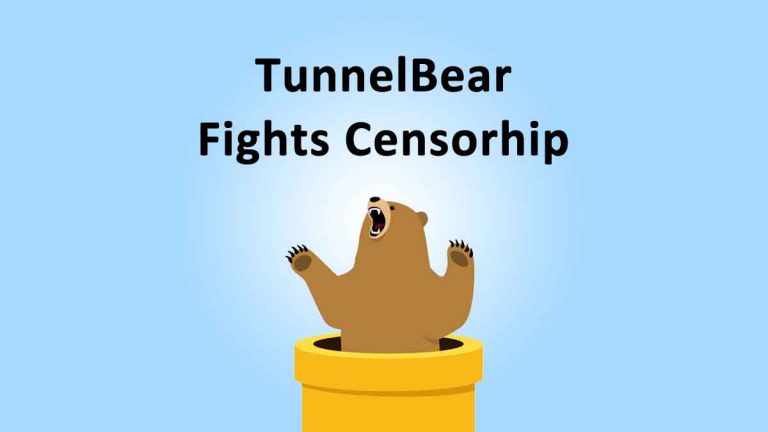 TunnelBear announced today that the company has partnered with four non-governmental organizations (NGO) as part of an effort to work against censorship. The company-wide initiative is dedicated to helping activists use the internet without fear of interference or prosecution.

TunnelBear says it has given 20,000 free virtual private network (VPN) accounts to four NGOs – Access Now, Frontline Defenders, Internews, and one other unnamed organization. The goal is to help these organizations battle censorship, regardless of where they live.

“At TunnelBear, we strongly believe in an open and uncensored internet. Whenever we can use our technology to help people towards that end, we will” said TunnelBear Cofounder Ryan Dochuk.

VPNs are used to encrypt data Anna device and protect it as it travels the Internet to its final destination . VPN’s are used to protect sensitive information. For example, your credit card numbers or your employers’ private files as you use the Internet. They are also used to hide what you’re looking at online so that no one can monitor your Internet activity or see that you are looking at restricted online content. Your internet service provider (ISP) won’t be able to see what you are ding online either.

VPN’s can be used to change your location by routing traffic to servers in other countries.  They are popular with activists and protesters because it keeps their online messages private.

You Can Try TunnelBear for FREE Too! Click here

TunnelBear does NOT log the activity of connected devices. A critical feature if you are concerned about privacy (HINT: You should be even if you’re not an activist!)

Why I Use TunnelBear

TunnelBear is a super easy to use lightweight VPN app. It works well on both Android phones and iPhones. I’ve been using a free version of TunnelBear on my Samsung phone for the last three years. TunnelBear works really well on super busy WiFi connections. I’ve tested it in multiple airports and it’s always worked great for me even when I travel through busy airports like Newark NJ and JFK.

With a free account, you get 500 MB per month of secure browsing which may be enough for light users. You can also get a little more free data if you tweet at TunnelBear. I’ve written before how I pay for IPVanish on my laptop because I upload and download a lot of images during my workday. Both of these VPN apps work very well, and I’ve used both of them everywhere I travel.

TunnelBear also has apps For Mac and Windows computers as well as Chrome, Firefox, and Opera web browsers. It’s lightweight and easy to use.

Just yesterday TunnelBear announced that it has disabled all of its Hong Kong VPN servers. This is because Mainland China passed a new wide-ranging security law for Hong Kong which makes it easier to punish protesters and reduces the city’s autonomy. The law is officially known as the Law of the People’s Republic of China on Safeguarding National Security in the Hong Kong Special Administrative Region.

The new Hong Kong security law defines crimes and punishments for the following:

This law is a threat to protestors, privacy advocates, and anyone who helps them. Even before the new security law, Mainland China has demanded access to servers located on the Mainland or used by companies located in Hong Kong. This new law rightfully has companies worried.

“While we do not store any personally identifiable information (PII) on any of our servers, we know we have a responsibility to keep our technical ecosystem safe, which this law may put at risk.” says TunnelBear.

TunnelBear is a Toronto based virtual private network (VPN) service founded in 2011. TunnelBear was acquired by McAfee in 2018.