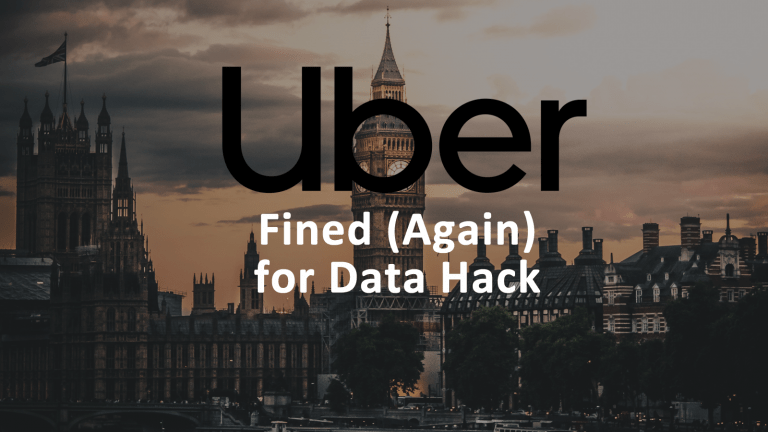 Uber Fined by European Officials for Paying Off Hackers

Uber was fined another $1.17 million by European Union authorities. The Uber data hack exposed the data of about 2.7 million UK customers and 174,000 Uber customers in The Netherlands. The fine is a combined total from U.K.’s Information Commissioner’s Office and the Dutch Data Protection Authority.

Uber covered up the hack until it was reported by the media in November 2017. The company failed to inform those affected by the data breach for about a year.

The UK Information Commissioner’s Office (ICO) fined Uber £385,000 ($491,284) and the Dutch Data Protection Authority added another €600,000 ($679,790) fine. Uber has already paid $148 million in fines to United States authorities for the same data breach. The Uber hack exposed the data of over 56 million US riders. Personal data of about 7 million Uber drivers was downloaded including approximately 600,000 U.S. driver’s license numbers.

In January 2016, the New York State Attorney General’s office fined Uber $20,000 for failing to disclose a 2014 data breach. Data was downloaded by the two hackers from an Amazon Web Services cloud-based storage system. The compromised data included full names of passengers and drivers, email addresses, and phone numbers. The stolen data also included the records of 82,000 UK drivers and records of their Uber trips.

Uber paid off the two hackers, who were former employees, $100,000 to keep the cyber security incident secret and to destroy the stolen data. At the time, there was no legal obligation to report the hack. ICO director of investigations Steve Eckersley said, “At the time, no steps were taken to inform anyone affected by the breach, or to offer help and support. That left them vulnerable.”

Because the data breach occurred in 2016, before General Data Protection Act (GDPR) went into effect, it was investigated under the Data Protection Act 1998. The maximum fine under the old regulation is £500,000. Had the hack occurred after May 2018, when GDPR took effect, Uber would have faced up to a €20 million (£17.7 million) penalty.

The Autoriteit Persoonsgegeven statement added, “The Uber concern is fined because it did not report the data breach to the Dutch DPA and the data subjects within 72 hours after the discovery of the breach.”