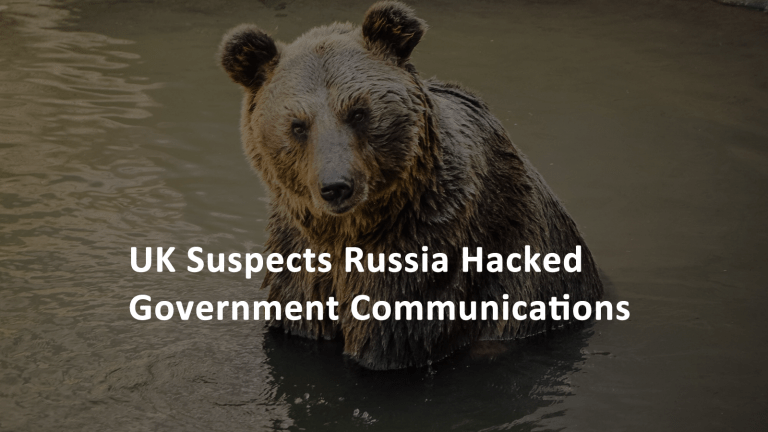 UK Suspects Russia Hacked Government Communications. The UK has opened an official investigation probing if Russian hackers are behind the theft of secret British diplomatic communications. The official inquiry into who leaked the cache of sensitive documents initially focused on senior UK politicians and officials but now has turned outward to Russian state-sponsored hackers. Espionage is considered a breach of the UK’s Official Secrets Act and an attempt to destabilize relations.

The hacked memos were written by Sir Kim Darroch, the UK ambassador in Washington. The large cache of stolen and very damaging UK government communications was published by a British journalist, Isabel Oakeshott. She denies that she received them from Russian contacts.

One particularly damaging memo sent by Sir Darroch to senior UK officials painted an unfavorable assessment of US President Donald Trump as his “dysfunctional” White House administration. After the initial investigation into British officials, it is thought that this is an attempt to damage relations between Britain and the United States. The investigation now focuses on Russian hacking attempts who may be motivated to disrupt relations between strong allies.

Britain’s Foreign and Commonwealth Office Permanent Secretary Sir Simon McDonald admitted that “there is clearly significant damage” from the leak and has handed over evidence to police aid in the foreign investigation. He admitted foreign hackers “will be in the scope of the leak inquiry.”

In response to the negative contents of the leaked memos Trump posted on Twitter that the United States will ” no longer deal” with Sir Darroch. The diplomat has been uninvited to an upcoming White House banquet hosted by the White House.

UK Government Hacked by Chinese in 2018

In December 2018 it as discovered that Chinese hackers had compromised the secure communications network of the European Union, known as COREU. Hackers were eavesdropping on sensitive diplomatic communications for several years before the spying was discovered. Cyber security researchers Area 1 discovered the breach and supplied over 1,100 cables were supplied to a news outlet as proof.

The hackers also compromised the communications networks of the United Nations, the American Federation of Labor and Congress of Industrial Organizations (AFL-CIO), ministries of foreign affairs and ministries of finance worldwide, and think tanks in Europe. The sensitive memorandums included conversations with world leaders.

Chinese hackers gained access by IT system belonging to the Ministry of Foreign Affairs of Cyprus. From there they breached COREU where they accessed diplomatic cables relating to a variety of sensitive international matters.

Advanced Persistent Threat Groups (APT) are organized hackers who are highly skilled at compromising and stealing from government targets and large corporations. APT hacking groups are commonly state-sponsored and act on behalf of their government. APT groups are assigned numbers as they are discovered. APT28 and APT29 are Russian hacking groups. They are also given pseudonyms by cyber security researchers so as not to offend governments as researchers publish findings of their hacking work.

Russian APT groups are often given names with the word bear in them. APT28 is also called like Fancy Bear. The United State’s government APT group is referred to as the Equation Group.