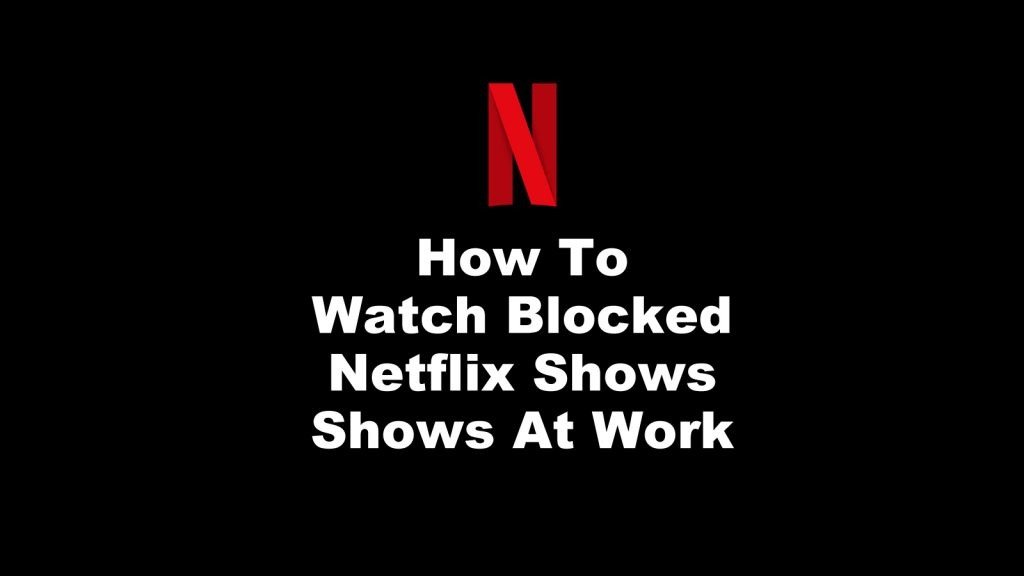 To watch blocked Netflix shows at work most employees have to get around corporate firewall rules or deal with slow internet connections. Netflix, Hulu, Disney Plus, and other streaming video services are frequently blocked by corporate and school firewall policies. Workplace SysAdmins setup firewalls – either at the router or in software – at the behest of management to stop employees from watching shows during work hours.

Watching blocked Netflix at work may not always mean that you are binge watching your favorite Netflix show while on the corporate clock. Workers on their lunch hour or break time may want to legit watch Jack Ryan, Stranger Things, Lucifer, or play Fortnite.

Can I Watch Netflix on My Work Computer?

Identify what’s blocking Netflix. Is it the computer you’re are using? You probably shouldn’t even try to watch any streaming video using a work computer. If you log in to your Netflix using a corporate computer or smartphone, you risk being tracked by corporate spyware on your machine. Yes, that’s perfectly legal as long they aren’t accessing the camera to watch you during non-work hours. Also, your account login information may be stored in the web browser or app located on company’s computer.

So, the first step to watching blocked Netflix at work or school is to bring your own device. Use your own tablet or phone. You can log into Netflix using a web browser or through the Netflix app.

If there is a firewall blocking you from watching Netflix, you’ll have to use a virtual private network (VPN) to reroute your device’s connection to the internet. If you have never used a VPN before, then read our VPN reviews to compare features and prices.

NordVPN NordVPN connects to over 5,000 servers and works on Linux, Windows, MacOS, and Android TV. NordVPN has apps for iOS, Windows, and Android mobile devices.

IPVanish IPVanish connects to over 1,300 servers and works on Linux, Windows, and MacOS. IPVanish has apps for Apple, Android, and Windows smartphones and browser addons for Chrome, Firefox, and Opera.

TunnelBear is a freemium VPN service. We tested it on Android phones extensively at airports and hotels. Like many free VPN apps, free accounts have a monthly data limits, but paid options are available.

If you are watching blocked Netflix shows at work or school, then its probably on a phone or tablet. Webroot offers a VPN that works well on both laptops and mobile devices. Webroot VPN is compatible with Windows, Mac, Android and iOS devices.

A virtual private network, called a VPN, is software that you download to your laptop, tablet, or phone. Using a VPN lets you use routers controlled by the VPN service to reroute your device’s connection to the internet. When you send your internet connection through other internet servers, you are able to circumvent firewall rules, like the ones that stop you from watching Netflix at work.

Unless you want to watch content that is banned in your region, monitored by the government, or censored, you won’t need to use a VPN that has a large selection of servers in other countries as options. For example, if you want to watch American Netflix in Canada, then you will need to use a VPN with servers you can connect to in the United States. If you simply want to watch Netflix like you do during non-work hours, then any VPN will work, as long as it supplies a fast connection.

How to Use a VPN to Watch Blocked Netflix at Work

If you want to watch blocked Netflix and need to use a VPN to watch at work, school, or anywhere else Netflix is blocked you probably want to pay for a VPN subscription. Although there are reputable free VPN apps like VPNHub and TunnelBear, they won’t work well with any streaming media. Most free VPN apps have data limits or throttle streaming content. You’ll end up watching Netflix endlessly buffer your show.

Many workers use a VPN all the time on their phones or personal laptops and tablets so their employer cannot read the contents of personal emails or what websites they visit while connected to their work internet.

VPN subscriptions are fairly inexpensive and start at about $4 USD per month.

VPNs are also useful for when you are traveling and using any public WiFi connection. If you are sitting working at a coffee shop or from a hotel room, a VPN protects your communications, usernames, passwords, and payment information from hackers.

A lot of people also use VPNs at home to avoid being tracked by Facebook, Google, and website cookies. Shopping websites and social media relentlessly track internet users so they can make money through advertisements and selling data. Hackers can steal login credentials, credit card numbers, and personal data while you are online. Using a VPN helps preserve your privacy and helps to fend off hackers.