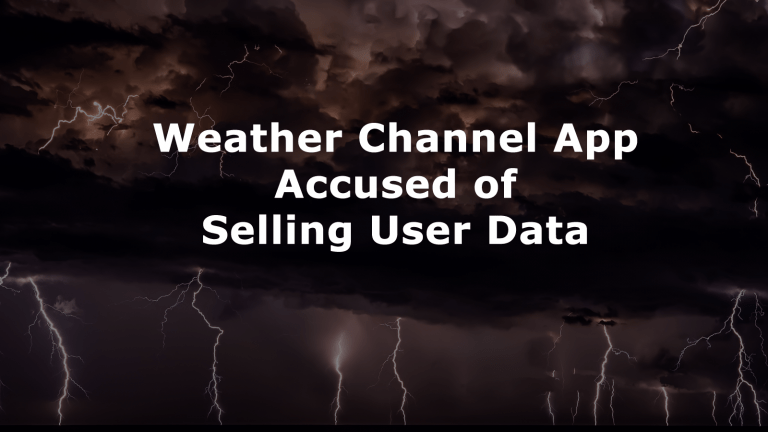 What is the Weather Channel?

Saswato Das, an IBM spokesman, said, “The Weather Company has always been transparent with use of location data; the disclosures are fully appropriate, and we will defend them vigorously.”

According to the NY Times investigation, the Weather Channel app led users to believe that sharing their location data was used only to give them local weather reports and forecasts. However, other uses for personal data, including advertising, were listed in a separate privacy settings area on the Weather Channel app. The location settings section of the app does not mention the that user data is being sold for other purposes.

One such use for the location data was for hedge funds promoted on IBM’s website. The Weather Channel app did not mention the analyzation of its users’ data for the hedge fund pilot program run by IBM. After the NYT inquiries, the app’s privacy policy was updated to state that it might share aggregated location data for commercial purposes such as analyzing foot traffic.

As you know, many people do not read those extensive privacy policies. If they do, they don’t always fully understand the true nature of how their data is being used. When someone downloads an app for the weather or to play a game, that’s all the data should be used for. Be very mindful of what permissions an app asks for. There is no reason for an app that is supposed to give your agenda for a trade show to have access to all your contacts and photos. Most of the time, you won’t be able to cherry pick which permission an app has access to. If you are unhappy with the app permissions, then you will have to delete it completely as most apps do not give you an opportunity to tune settings.

Advertisers are generally interested in aggregate data. Meaning they want groups of people who ft their ideal customer demographic. Companies collect location data from devices sell to advertisers and political organizations seeking insights into consumer behavior. Businesses that sell data, do need to prove to data buyers (advertisers) that paying makes money for them. Location data is a huge part of the data buying and selling business model. If a data seller, can prove that a consumer walked into a retail location as a result of an advertisement, then that’s a win for the advertiser.

Although data is anonymized by keeping in large sets of data and stripping out names and device IDs, it is possible that those with access to the raw data or those responsible for working on the algorithms and programming that collect data from apps and hardware can see the identities of individuals. This was the case with one of the Uber scandals. Employees were able to identify individual users of the app and monitor the locations of ex-lovers and politicians.