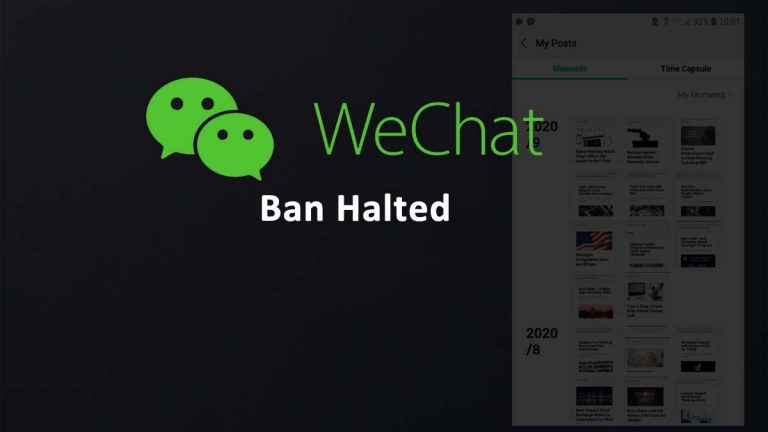 Federal Judge Finds no Justification for Ban on Security Grounds

A ban on WeChat app downloads was halted over the weekend when a U.S. District Court judge granted a preliminary injunction. The Judge found that the defense failed to prove clear justification for a ban on national-security grounds and that a ban harms First Amendment rights.

U.S. Magistrate Judge Laurel Beeler for the United States District Court for the Northern District of California stopped the US Commerce Department from implementing restrictions to bar US users from downloading WeChat. Removal from US-based app stores like Google Play and the Apple Store would also prevent users from receiving money through the app.

In August, a group named the U.S. WeChat Users Alliance filed a suit to strike down Trump’s executive banning WeChat.  The group represents Chinese diaspora who have few other options to talk to people in mainland China.

“But on this record — while the government has established that China’s activities raise significant national security concerns — it has put in scant little evidence that its effective ban of WeChat for all U.S. users addresses those concerns,” Beeler’s order reads.

U.S. District Court judge granted the preliminary injunction Saturday, 19 September. The ban was slated to go into effect on 20 September at midnight. The U.S. government can now appeal to the Ninth Circuit court to seek to overturn the stay

WeChat is a messaging app owned by Tencent Holdings Ltd. It is mainland China’s most popular mobile app with over 1.2 billion monthly users and nineteen million daily active users. Tencent is based in the People Republic of China (PRC) and reportedly has close ties with the Chinese government.

Unlike Facebook Messenger, WeChat is much more than a messaging app. People use WeChat to send money to people, to join interest groups, and read the news, follow celebrities, and learn about trending topics.

WeChat functions more like a social media app and is often the only app US residents can talk to loved ones back in mainland China. American apps like Facebook are blocked in mainland China by the Great Firewall. Use of a virtual private network (VPN) to circumvent restrictions became illegal in the PRC last year.

“The plaintiffs have shown serious questions going to the merits of their First Amendment claim that the secretary’s prohibited transactions effectively eliminate the plaintiffs’ key platform for communication, slow or eliminate discourse, and are the equivalent of censorship of speech or a prior restraint on it,” wrote Judge Beeler.

On August 6, US President Trump signed an executive order banning WeChat and video app TikTok. Chinese companies own both apps. ByteDance owns TikTok and Tencent owns WeChat. After filing a suit in federal court TikTok scrambled to find a US partner. Tencent does not appear to be reacting to any of the intimidation efforts by the US administration.

Beeler said the defense failed to show clear justification for a ban on national-security grounds.