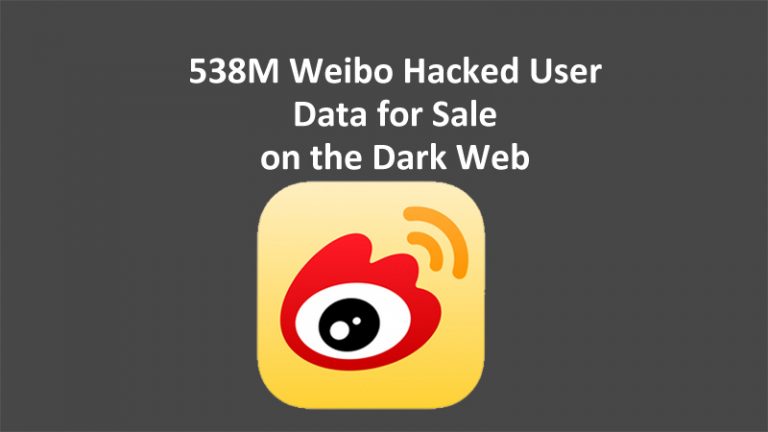 Weibo usernames and locations are for sale on the dark web. According to a post by Jinse.com the hacker selling the data hacked into Weibo in mid-2019 and stole the user database of 538 million users. The cache of data includes real names, Weibo usernames, gender, and geographic location. Hacked data also includes the account information also includes Weibo user ID, number of posts, number of followers. For 172 million of those users phone numbers are also exposed. No passwords are for sale. It’s all for sale for a bargain price of ¥1,799 ($250).

Weibo posted a notice about the data, dismissing the incident as voluminous queries against its API. Weibo assures users that their accounts are safe because passwords were not hacked. Weibo users have the ability to query the usernames of friends and phone numbers in their phone’s address book. The company claims this interface was used in a brute force attack to steal the user data. However, the corporate statement does not logically explain how the hacker obtained other details like gender and location data that is not part of API query results.
“Users’ mobile phone numbers were leaked through forced matching with an address book API in 2019. The rest of the public information was scraped on the web.”
Weibo later removed the notice.

Sina Weibo, or simply Weibo, is a social media channel with over 600 million users and more than half of the microblogging market. Weibo is the Chinese word for “microblogging” which causes confusion with other Chinese microblogging services with similar names like Tencent Weibo, Sohu Weibo, and NetEase Weibo.

Sina Weibo is second only to WeChat in China in terms of the number of users. It can be used in English, but users must have a verified Chinese phone number to get an account.

Sina Weibo, now known as Weibo, initially used the domain name t.sina.com.cn when the app launched but change to weibo.com in 2011. The social media channel is sort of a cross between Facebook and Twitter, which are censored content in Mainland China. Apps are available for iPhone/iPad, Android, Windows Phone, Symbian, BlackBerry OS, as well as Weibo Desktop.

Even though account passwords are not part of this data breach, it is still a concern. People often use the same password across multiple online accounts. If the hacker, or whoever buys the stolen data, matches the user phone number to a password from another data breach, it is possible to hack into any account using the same login credentials. For example, if you use the same password for Weibo that you do for your email, the hacker can use that to reset passwords for more valuable accounts like payment cards, eWallets, and bank accounts.

In January 30 million hacked payment cards were posted for sale on the dark web by Jokers Stash.